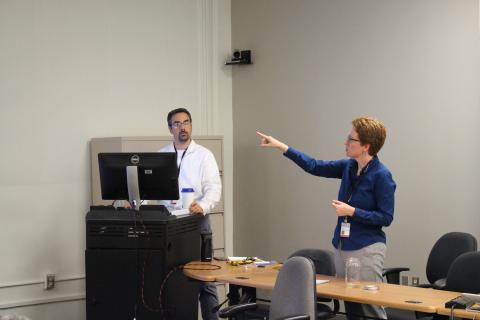 Dr. Rachel Mauk admits she was bit by the weather bug at a young age. She grew up studying weather patterns from her west-facing bedroom window, and quickly started to see a deeper connection between what she saw outside and what she saw on the local weather report.

“When I was six or seven years old, I started to understand the meaning behind the information on the weather maps, that you could actually predict what was going to happen to a certain extent,” Mauk said. “All of the codes and symbols, to my brain, were like a treasure trove of puzzles to solve.”

She went on to earn a BS in physics, and an MS and PhD in Atmospheric Sciences from The Ohio State University. Midway through her PhD program, Mauk started to feel like she wanted to move in a different direction.  Her interest had always been in applying science to impact people and guide informed decision-making. It was around this time that she was introduced to GRC.

“Even early on, I was so attracted to GRC’s role in informing policy,” Mauk explained. “I had always really loved data analytics, digging into data and finding patterns.  It was a good opportunity to try another application for that interest in data.”

To the outside observer the leap from meteorology to health data and research analysis may seem large but Mauk finds the fields have more in common than one might think.

“The biggest thing physics taught me was how to break down a problem,” Mauk explained. “At GRC we’re asked to examine things like the service utilization in a particular group of Medicaid beneficiaries with a certain diagnosis. I can break that down fairly easily into the steps I need to take to pull the data out, and to explain the assumptions I’m making.”

Dr. Mauk has built a strong foundation on her unique training and has established herself as a trusted expert for state partners and GRC leadership.  She describes herself as an innovative coder, who strives to make things run faster while still maintaining accuracy. Many of the daily processes that GRC utilizes are built on her coding expertise.

“I’m proud of the code I built for the Behavioral Health Redesign project,” Mauk shared. “It became the foundation for a lot of our data analytics work which is now a really important part of what we do to assist and support our state partners.”

She has also proven herself as an invaluable resource for designing and creating data visualizations.  Mauk created maps to illustrate health data for opioid monitoring and Gestational Diabetes projects, but she cites the Tableau dashboard she created for the Behavioral Health Redesign project as one of her proudest accomplishments.

She attributes many of her successes to the collaborative culture among GRC staff.  “I’ve really benefitted from the exchange of ideas around here, so many people are so giving of their knowledge and time, that’s one of things I love about my work,” Mauk said.

Throughout her life, Mauk has often found herself outnumbered by her male counterparts, both in her studies and in her career. As a trailblazer in her field, Dr. Mauk is doing her part to encourage and support women pursuing careers in STEM.

“I’m a board member for the Women in STEM alumni society, we’re working hard to get that up and running,” Dr. Mauk shared. “I love mentoring students and new staff, and I hope that continues to be part of my role at GRC.” As a woman in a male dominated field, Mauk shared advice to her female counterparts.

“Have confidence you know what you’re doing,” Mauk advised. “Confidence doesn’t mean you have to be right all the time, but at the same time don’t let people trample you because you weren’t right.  Always continue to learn, there are always opportunities to pick up new skills and I think that’s how you prove yourself and stay relevant.”

When she’s not reinventing coding processes and encouraging the next generation of female researchers, Dr. Mauk can often be found in unexpected places, like the aisles of the Ohio Theatre and the lawn of the Columbus Commons.

“As an undergrad I was able to take courses in a lot of different areas, like music, psychology and English,” Mauk explained. “But when grad school rolled around that wasn’t really an option and I missed that other part of my brain, it wasn’t really being activated. I was looking for different opportunities and ultimately joined the Columbus Association for the Performing Arts as a volunteer in 2010.”

Through her work with CAPA she has supported Balletmet, the Columbus Symphony, Picnic with the Pops and Broadway tours. The experience has given her the creative balance she was seeking but has also reinforced her view on the power of the performing arts.

Volunteering with CAPA fulfilled another facet of Dr. Mauk’s life as it was there that she was introduced to her husband, Eric.

“He started volunteering about 18 months before I did,” she shared. “We connected over a shared STEM background and a shared love of the performing arts. We’re kind of famous in the CAPA and Symphony circles.”

Dr. Mauk and Eric expanded their family a few years ago when they brought a feisty grey cat named Grace into their home.  She shared that her family helps her keep perspective on what’s important.

“Eric and Grace remind me that there is life outside of GRC and sometimes I need to step back and say this can wait until tomorrow.  Also it’s hard to balance a laptop and cat.”

What are you listening to right now?  The last thing on my playlist was the Last Jedi soundtrack by John Williams.  My playlist is pretty diverse.

Where have you traveled this year? I’ve traveled to Tucson, AZ three times, I was born there and my mother and sister live there so I go back pretty frequently.  I’ve also visited family in Seattle and visited DC twice just for fun.

What is something people at GRC would be surprised to know about you? I taught myself to juggle in high school.  I can probably still do it but only spherical objects and no more than 3 objects at a time.

If you could do any other job in the world what would it be? I’ve always wanted to be a stage manager, I’ve been able to go backstage a few times through work with CAPA, its really cool.  If we think wrangling data is stressful I can only imagine how it would feel to be a stage manager on a live performance night.